Serving the Needy with Respect and Dignity 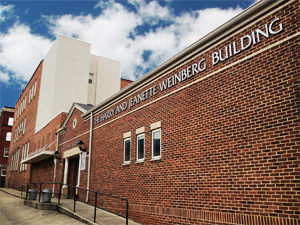 The Franciscan Center, the Harry and Jeanette Weinberg Building

The Franciscan Sisters of Baltimore began their ministry in 1891. They fed the hungry and cared for orphans. Recognizing the dignity of each human being and serving all people with respect were cornerstones of their ministry.

By the mid-1960s, the Franciscan’s building at 2212 Maryland Avenue was nearly empty, and the Provincial wanted to put the building to better use. Sister Irene Marshiano was assigned to survey the community and determine what they needed. MUND (Model Urban Neighborhood Development) identified emergency food and clothing services as the most pressing needs.

With a single gift of Pioneer Natural Gas Company stock (donated by Helene and Robert Rea of Philadelphia) and space provided by the Franciscans, the Franciscan Center opened on September 10, 1968. Sister Irene was the first director. Of the early days, she recalled, “There were just two of us [Sisters], plus Third Order members and lay volunteers. The first month, we served 30 people.”

As time passed, the needs of our clients increased. In 1980, the Center acquired the adjoining row house. With the opening of a dining room, hot meals could be provided instead of sandwiches. The second floors were used for the new Emergency Assistance Program and AIDS Outreach program. A pantry program was also developed to provide clients with groceries to take home.

By the early 1990s, the two row houses were inadequate and in need of extensive repairs. With the closing of the St. Francis School at 2226 Maryland Avenue, the Sisters offered the vacant school to the Center. In 1993, the Center moved from its humble origins to a modern, state-of-the-art building.

We now offer a continuum of care that includes food, clothing, emergency health services, counseling and technology training to help clients become as self-sufficient as possible.

This error message is only visible to WordPress admins

Please go to the Instagram Feed settings page to create a feed.